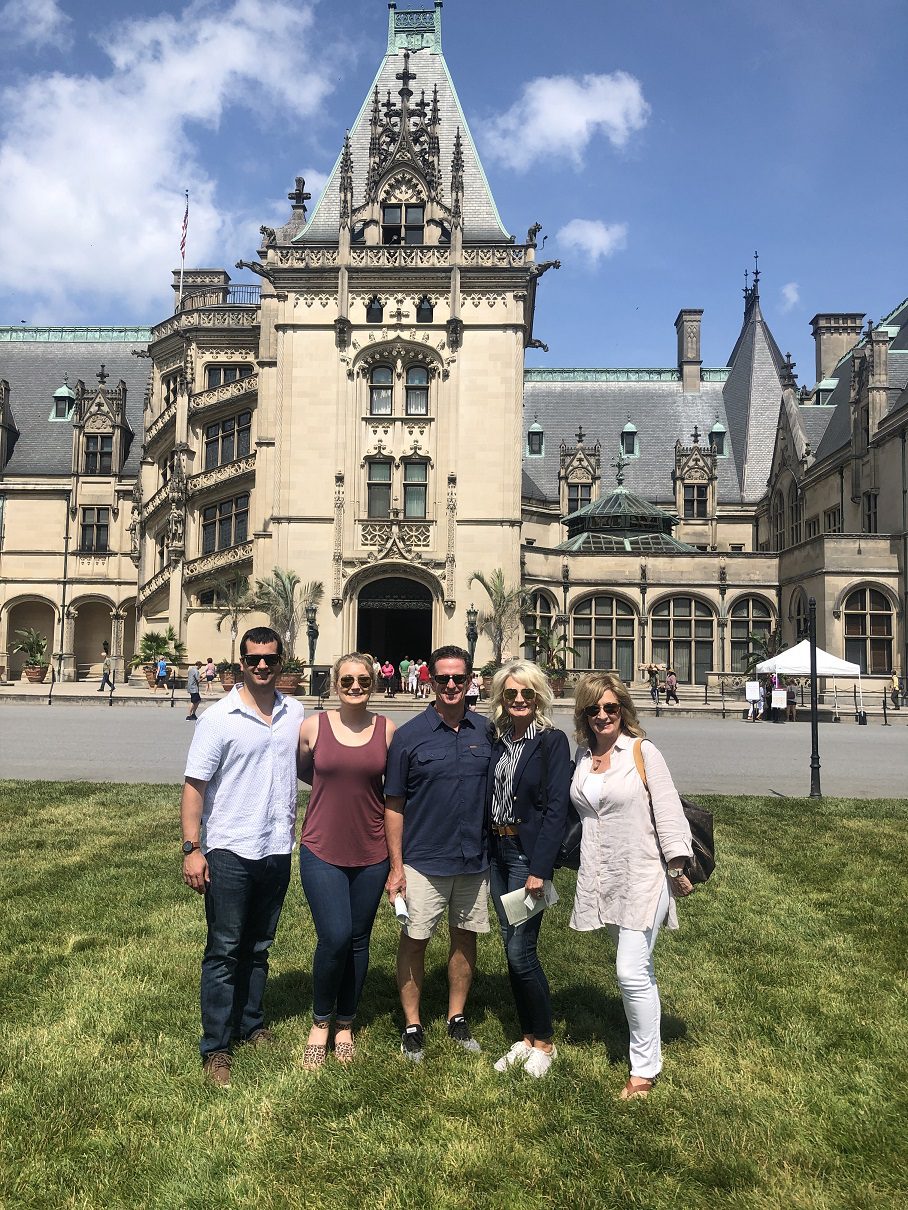 Touring the estate with, left to right, Austin Engerson (my niece’s boyfriend), Bridgette Jenner (my niece), Jim Barnum (my brother-in-law), Jacqueline Barnum (my sister) and me.

How much happiness can you pack into one weekend? A lot! My daughter Lindsay was married this month just outside of Asheville, North Carolina, with the Smoky Mountains looming in the distance. It was a beautiful celebration, and two days later, I toured Asheville’s magnificent Biltmore Estate  with some of my family members, above.

The 250-room French Renaissance chateau was a collaborative effort between owner George Vanderbilt, architect Richard Morris Hunt and landscape architect Frederick Law Olmsted.  Olmsted’s name is probably familiar to you – he designed some of the Chicago area’s most picturesque green spaces.

The mansion took six years to build, and when it was completed in 1895, it encompassed four acres of floor space. It is the largest private residence in the United States, with 35 bedrooms, 45 bathrooms and 65 fireplaces.  That sounds more like a hotel than a home to me! I thought you might enjoy a virtual mini-tour, starting with the circular grand staircase, below. 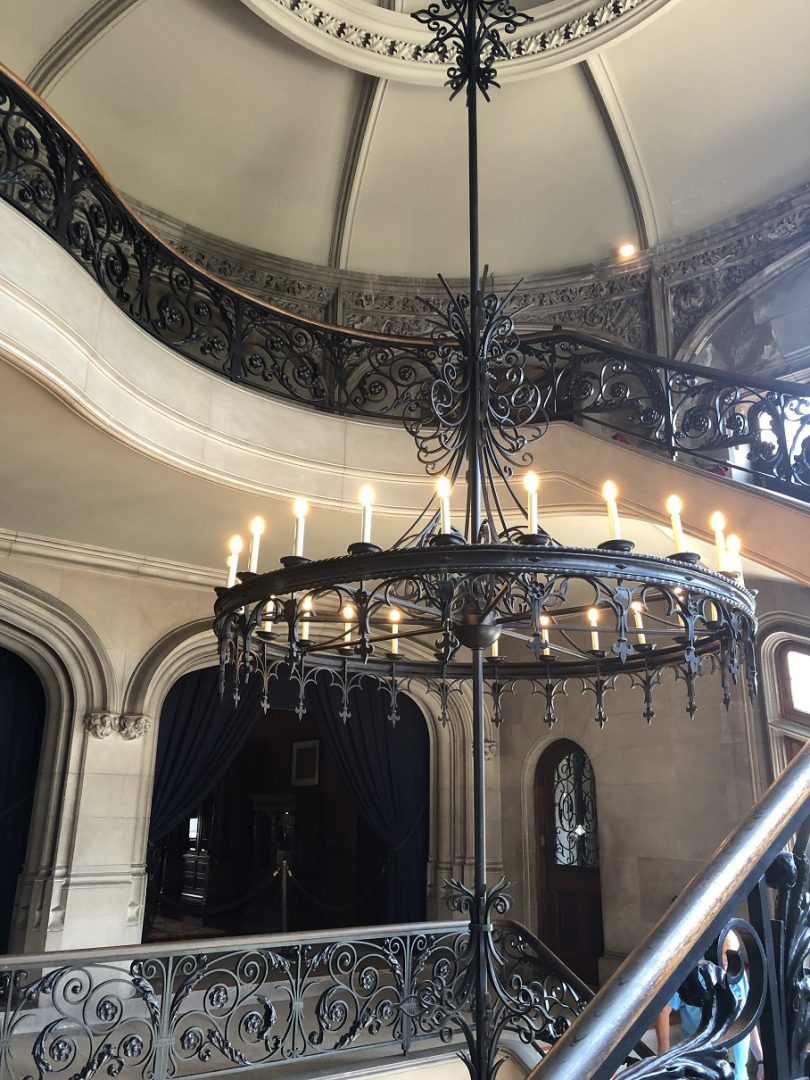 The chandelier is so large that it requires 72 light bulbs.

This 102-step staircase winds all the way up to the fourth floor. Suspended through the center is a large wrought-iron chandelier encircled by 72 light bulbs.  I love the way the chandelier echoes the elaborately shaped wrought-iron balusters. Imagine making an entrance on that staircase! 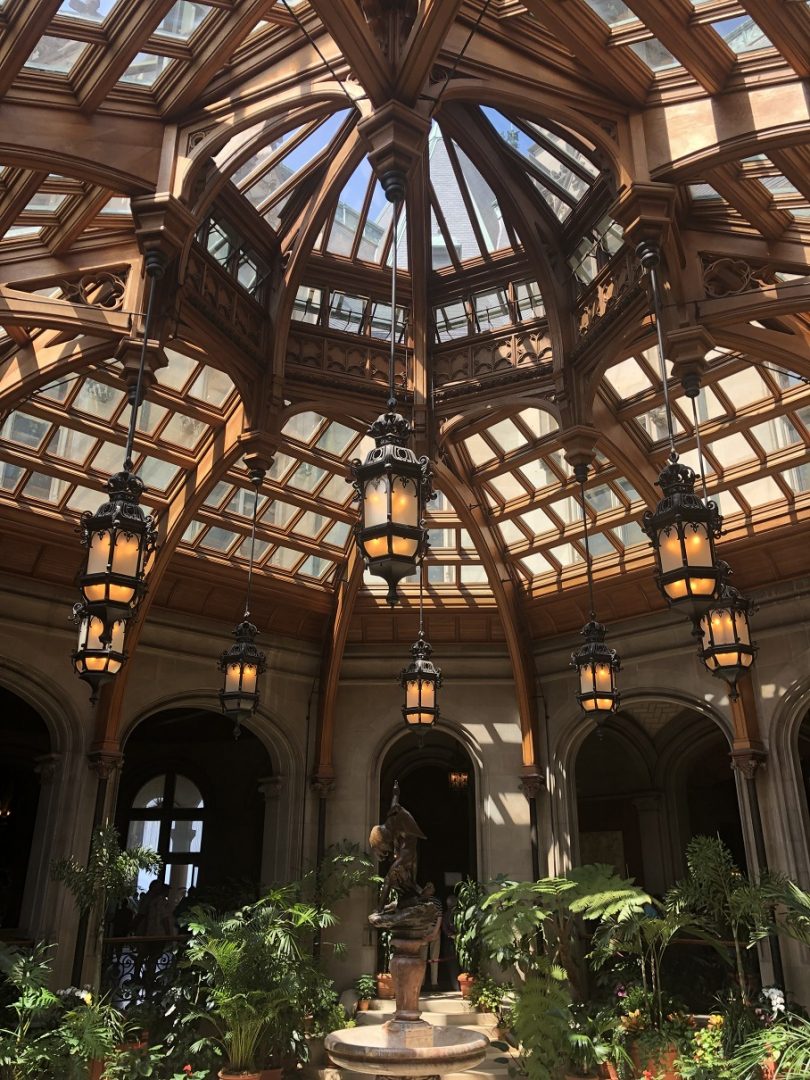 George Vanderbilt opened the house to his family on Christmas Eve 1895.

Wouldn’t you love to have an indoor garden like this at home? The Winter Garden’s glass domed roof provides sunlight for the lush plantings and illuminates the center fountain sculpture, called “Boy Stealing Geese” by Karl Bitter.  The sheer volume of the space, the dramatic ceiling, arched doorways and wrought-iron pendant lights make this an inspirational spot for quiet contemplation. 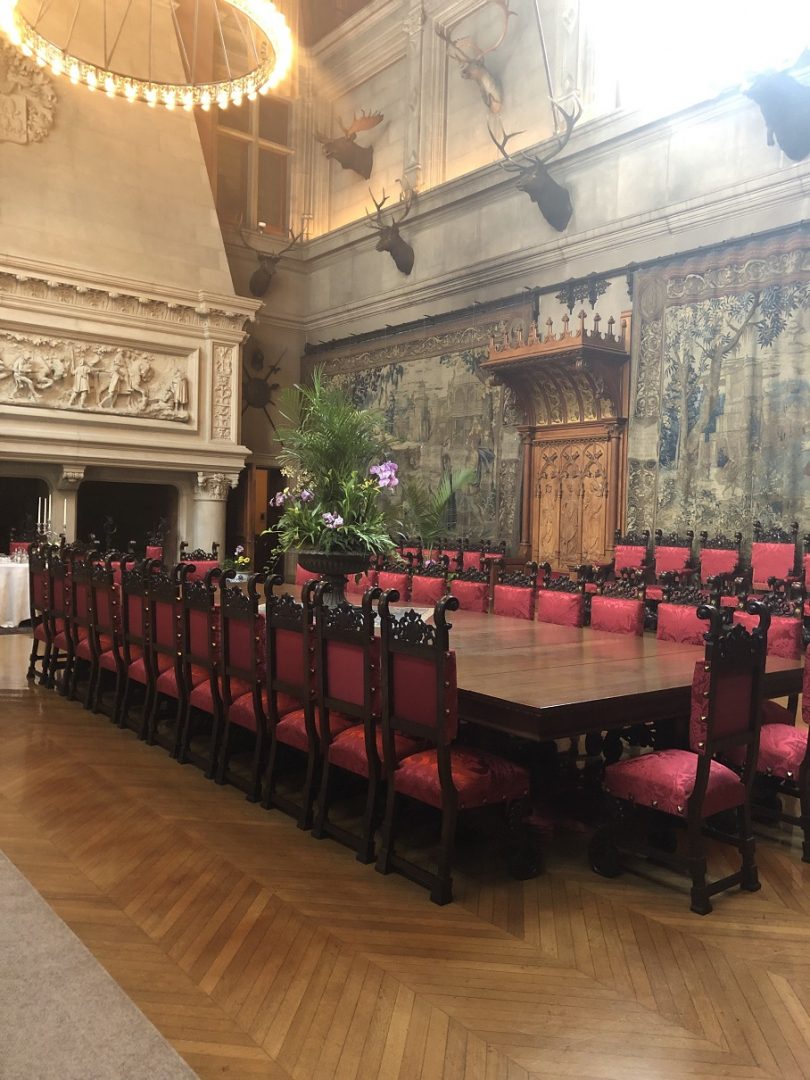 George and Edith hosted many festive dinner parties and celebrations in this impressive room.

The Banquet Hall is seven stories tall – no kidding – and it is lined with Flemish tapestries from the mid-1500s. Just imagine the parties that George and Edith hosted in this regal room. Did you count the chairs? There are 22 around that enormous dining table, including two chairs at either end. I wonder if George and Edith sat side-by-side, or at opposite ends? 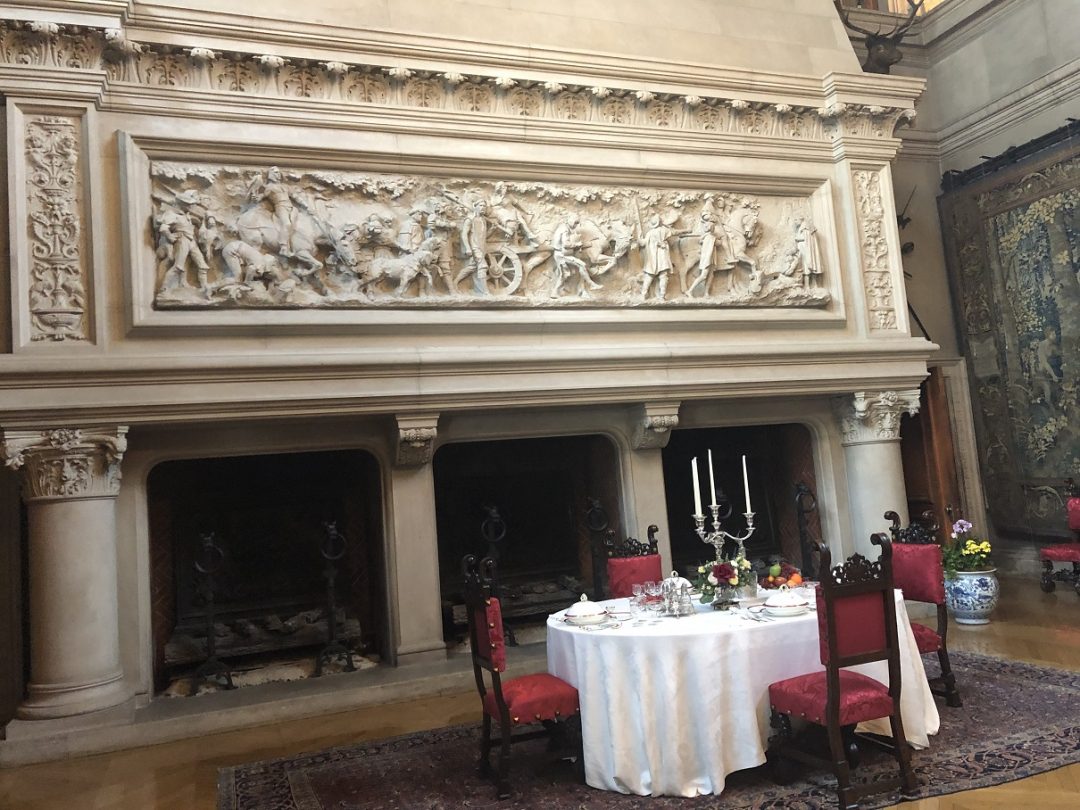 It must have been quite toasty in front of that fireplace when all three openings were ablaze.

When the Vanderbilts were just entertaining one other couple in the banquet room, they might have seated them at this intimate table for four. To call the fireplace “oversized” would be an understatement – it looks like it could swallow that table!  With three separate fire boxes and an elaborately carved fresco, it is definitely a memorable backdrop for a meal. 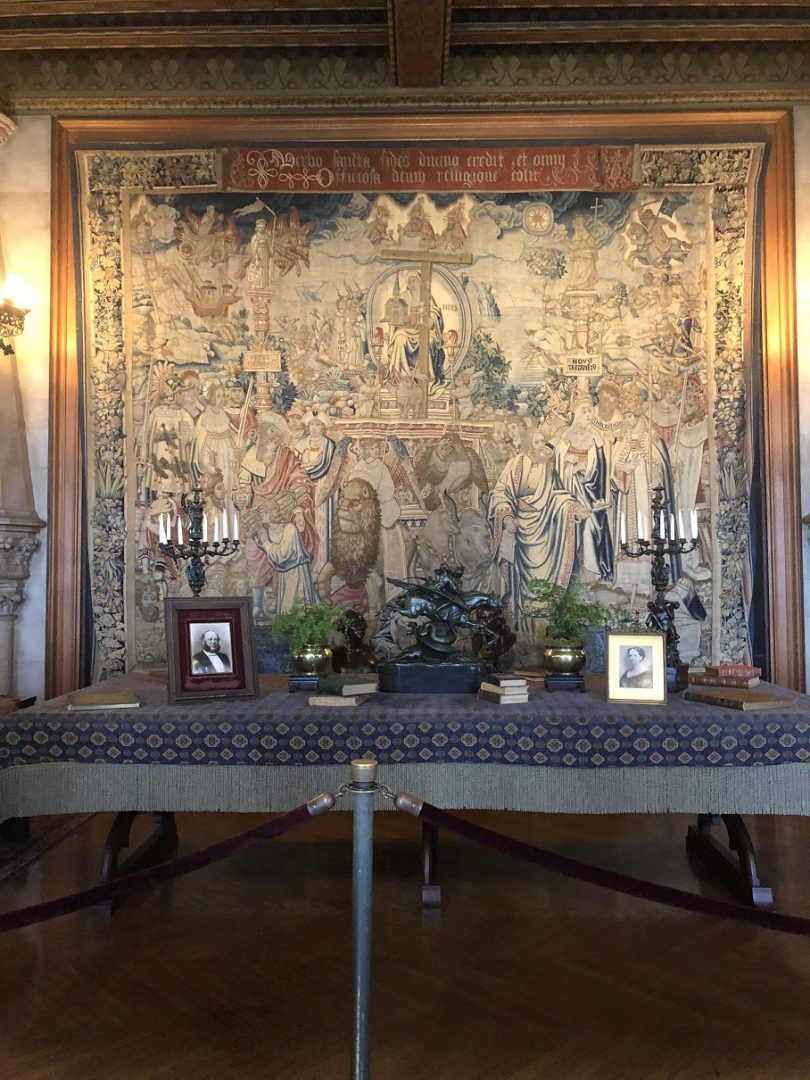 It took 10 years to make this detailed tapestry, which symbolizes faith, one of the seven virtues.

In the Tapestry Gallery we found priceless wool and silk hangings, including three that were part of a rare set of seven referred to as “The Triumph of the Seven Virtues.” They were created in Flanders in the early 16th century.  Not many examples from those sets remain today, but Biltmore is home to Prudence, Charity and Faith, which is pictured above.  “The Triumph of Faith” shows a woman holding a church, chalice and cross. The inscription translates as: Holy faith trusts in the divine work and devotes herself wholly to God with dutiful reverence. 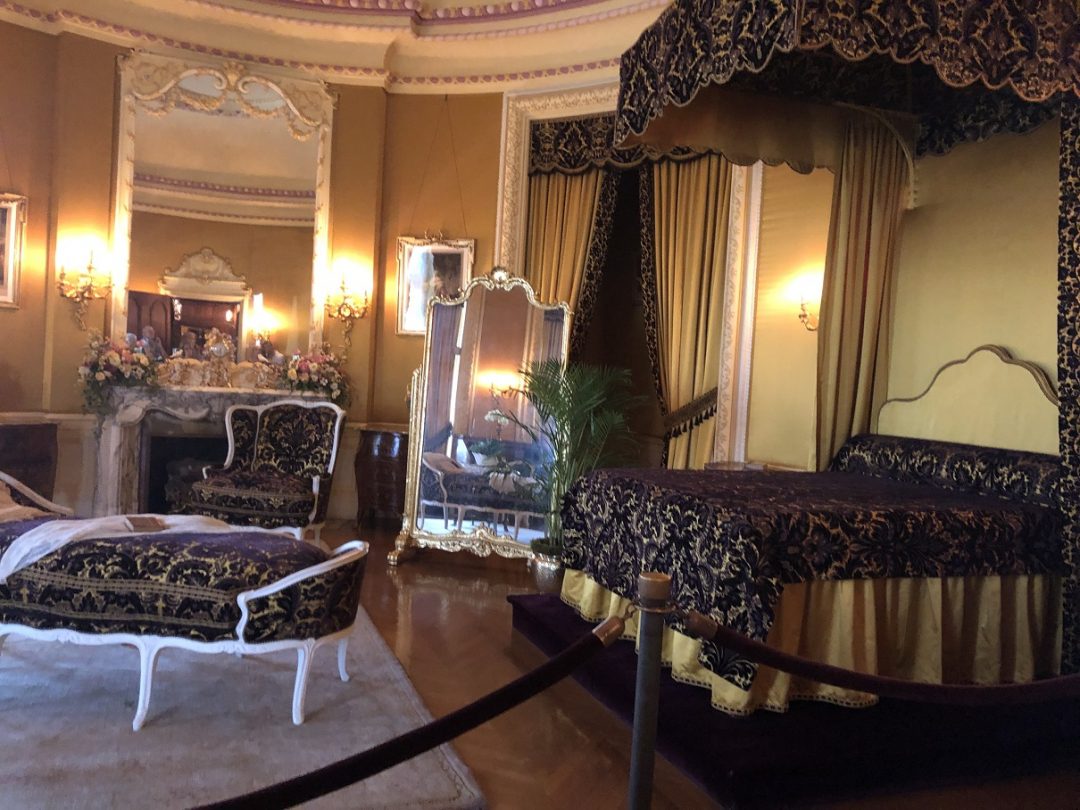 Edith Vanderbilt was 25 when she married George.

With its purple and gold silk fabrics and Louis XV-style furnishings, Edith Vanderbilt’s oval-shaped bedroom seems to tell the story of a very feminine woman who enjoyed gracious living and a private place to relax.  I can picture her stretching out on the settee, or checking out her floor-length gown in the mirror before heading downstairs to host a huge dinner party in the banquet hall.  If only this were a bed-and-breakfast, I would make a reservation for a weekend! 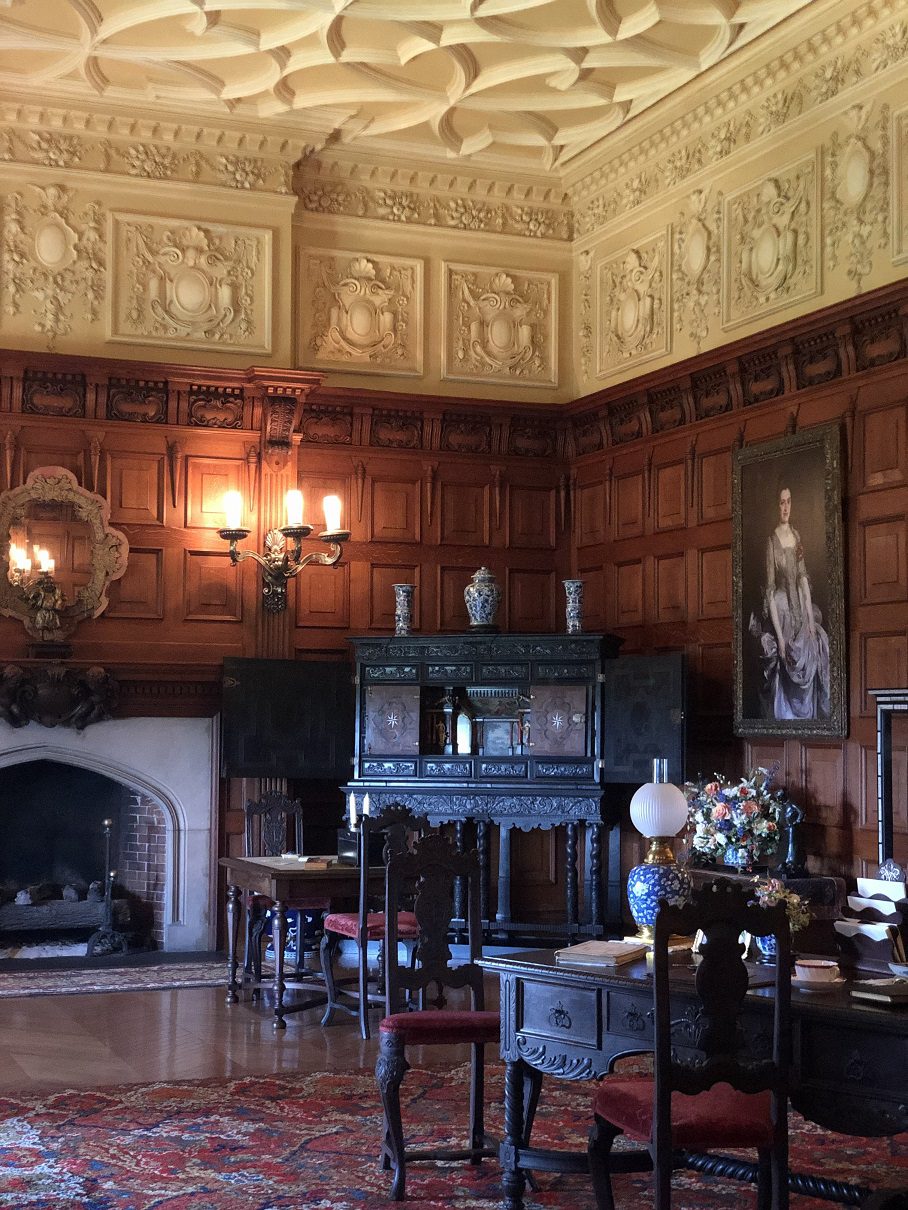 Named for its beautiful oak paneling, this sitting room houses the mansion’s most valuable piece of furniture.

The Oak Sitting Room connects George and Edith’s bedrooms. This is where they shared breakfast and planned the day with the head housekeeper. The centerpiece is the large, ebony, hand-carved cabinet on a stand. We were told that it is the most valuable piece of furniture in the home. Behind the inlaid parquetry doors in the photo below is a charming, miniature scene. Next to the cabinet is a John Singer Sargent painting of George Vanderbilt’s aunt.  The richly carved millwork on the walls and the grilled ceiling add layers of texture and elegance to the room. 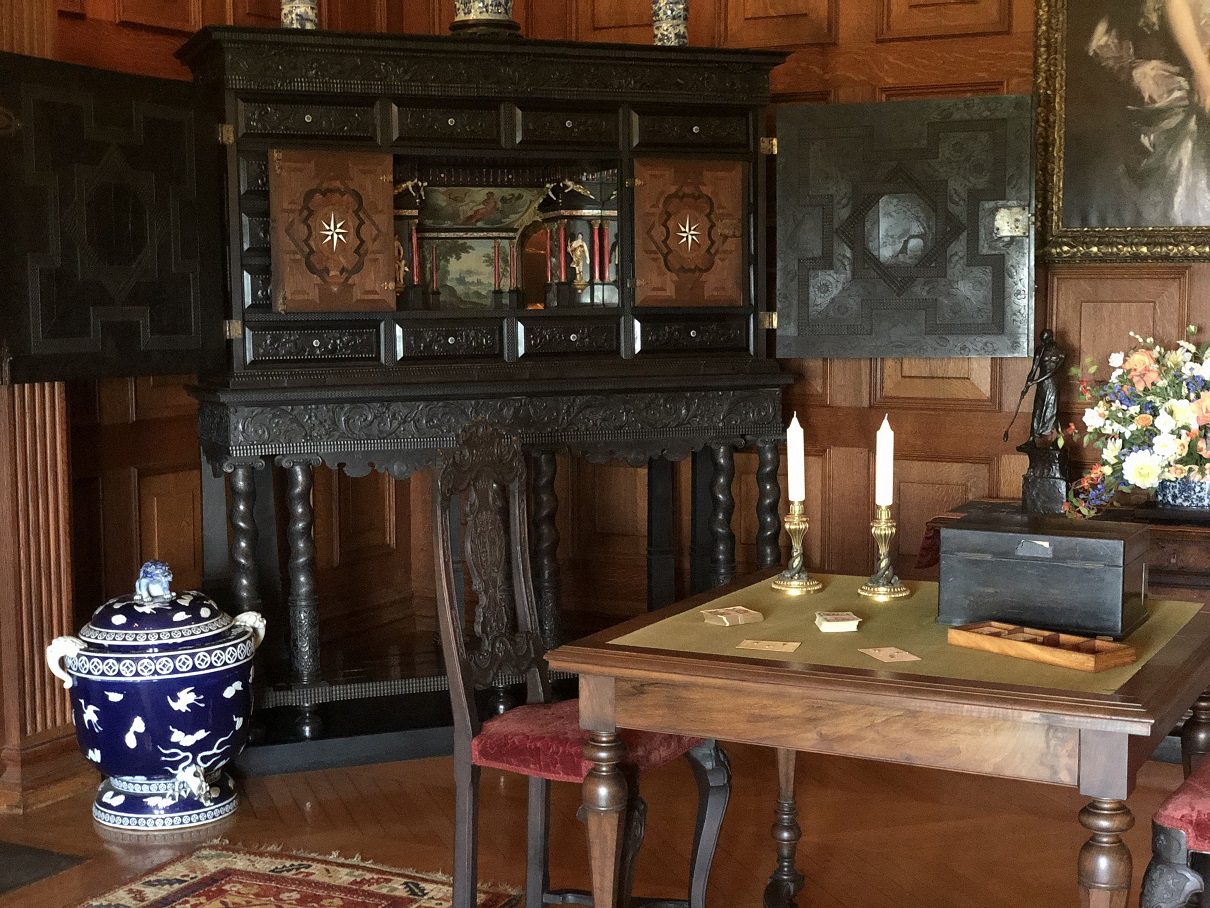 A classically inspired scene is painted inside the exquisitely carved cabinet in the Oak Sitting Room. George and Edith might have played cards at the game table. 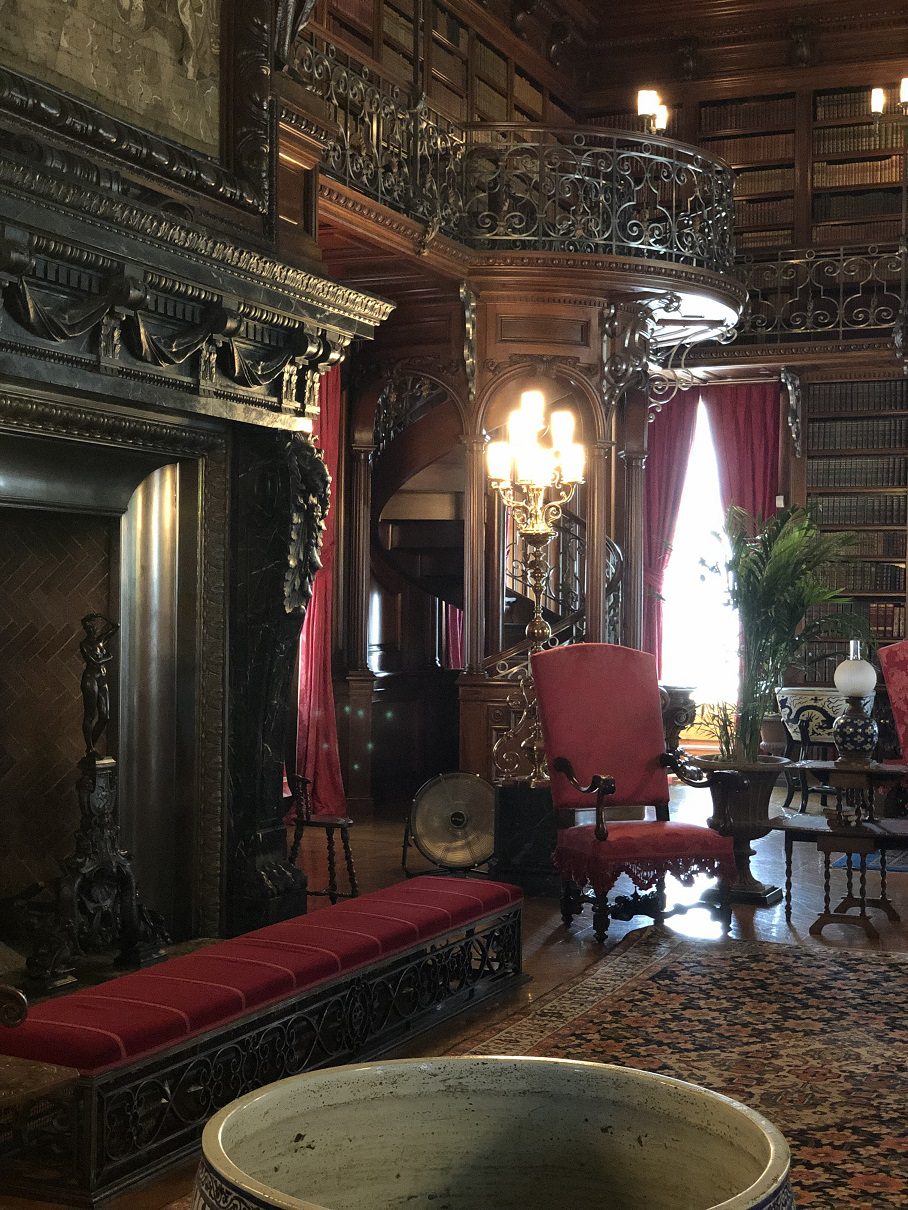 Reading was a passion for George Vanderbilt, who built a library of 22,000 volumes.

George’s private library of 22,000 books was probably larger than most public libraries, which were a fairly new concept in that era.  The subjects range from American and English fiction to world history, religion, philosophy, art and architecture. The dark woods and wrought-iron details give this two-story space a masculine mood. But Edith would have been at home here, too, sitting beside her husband in one of the red upholstered chairs. 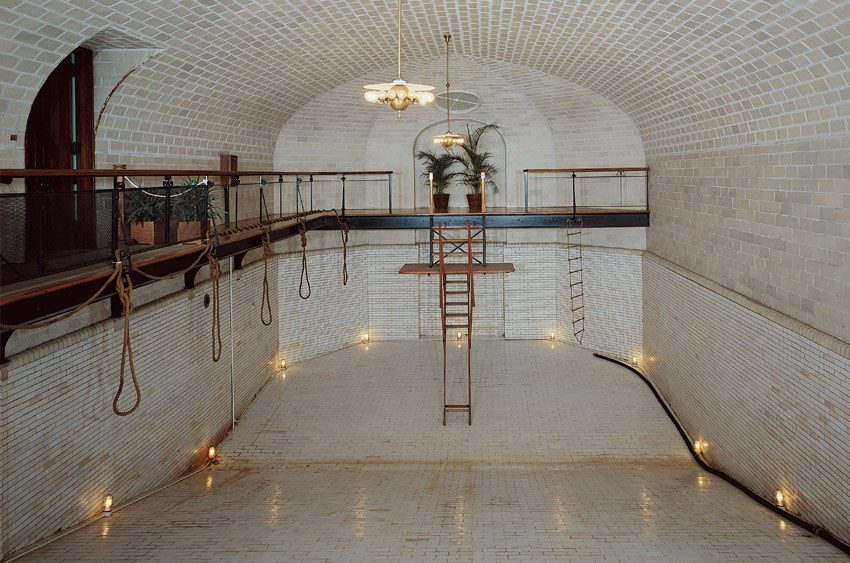 After it flooded the basement, the pool was never used again.

I couldn’t resist showing you the 70,000-gallon swimming pool, which was heated by a steamer and equipped with underwater lighting at a time when many homes had no electricity.  However, there was no system for keeping it clean, so each time it was used it had to be drained and scrubbed! Eventually it flooded the basement after a party and was never filled again. The vaulted tile ceiling was designed by architect Rafael Guastavino, who also designed and built the Basilica of St. Lawrence in Asheville. 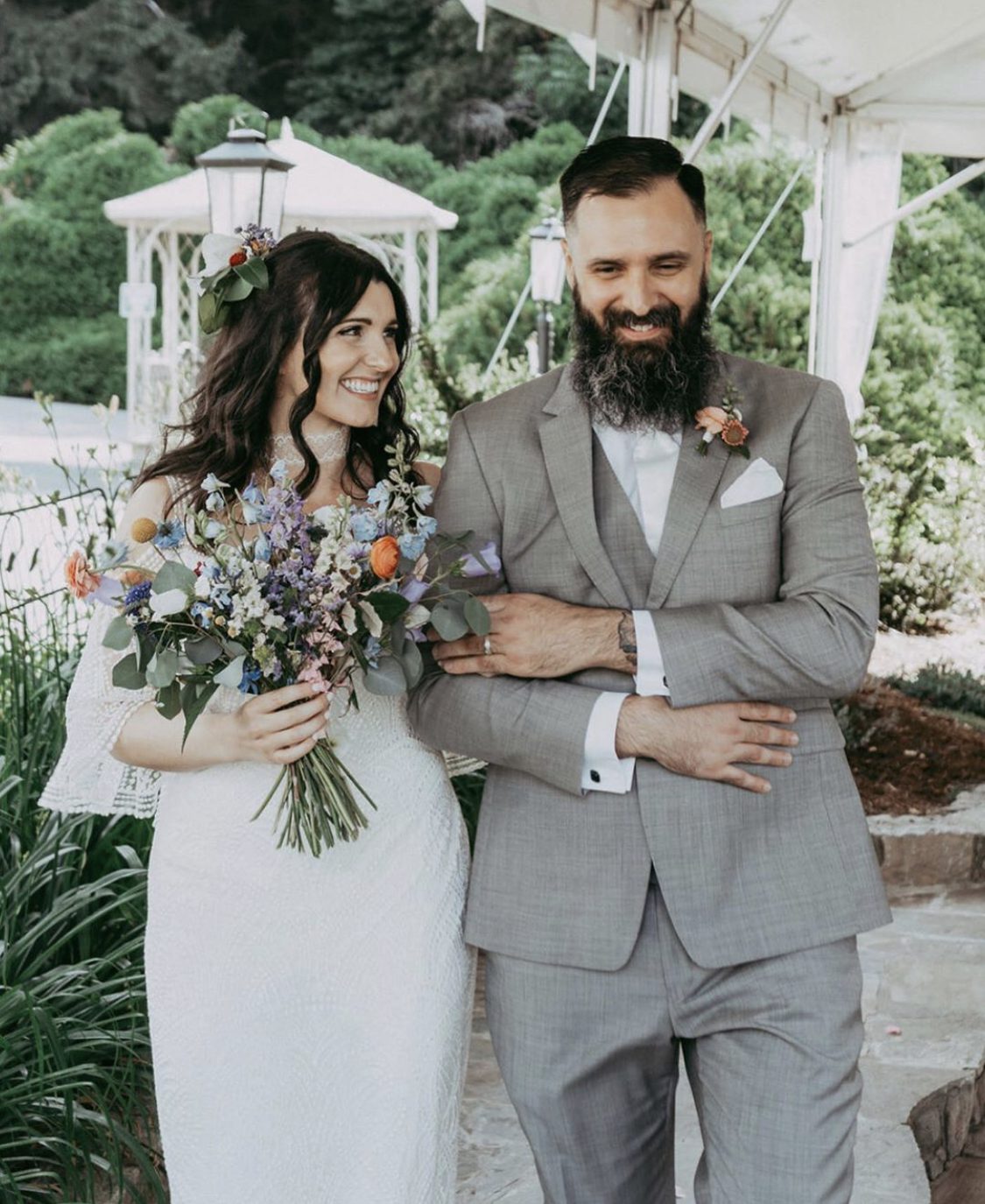 Lindsay and Brian after their vows.

I also couldn’t resist showing you a photo of Lindsay and her new husband, Brian! I  hope you enjoyed your tour and are inspired to see this magnificent mansion in person. 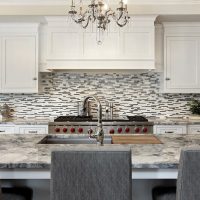 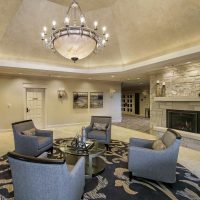